Context and scientific stakes of the project

For 30 years, the Pyrenees have provided an innovative framework for research into the dynamics of pastoral systems in high-altitude areas over time. Beginning on the Enveitg mountain in the mid-1980s (Rendu, 2003, Bal, Rendu, Ruas, & Campmajo, 2010, Rendu, et al, 2009) were then set up in about ten interdisciplinary workshop areas, each of them designed as a laboratory for the interactions between societies, their space and their environment over the long term (Fig. 1).

Over the years, this research theme has developed and research has been extended to the Alps (French, Italian, Swiss, Austrian), the Massif Central, the Jura, the Cantabrian Cordillera and the Sierra Nevada in Spain ...to all the mountain ranges 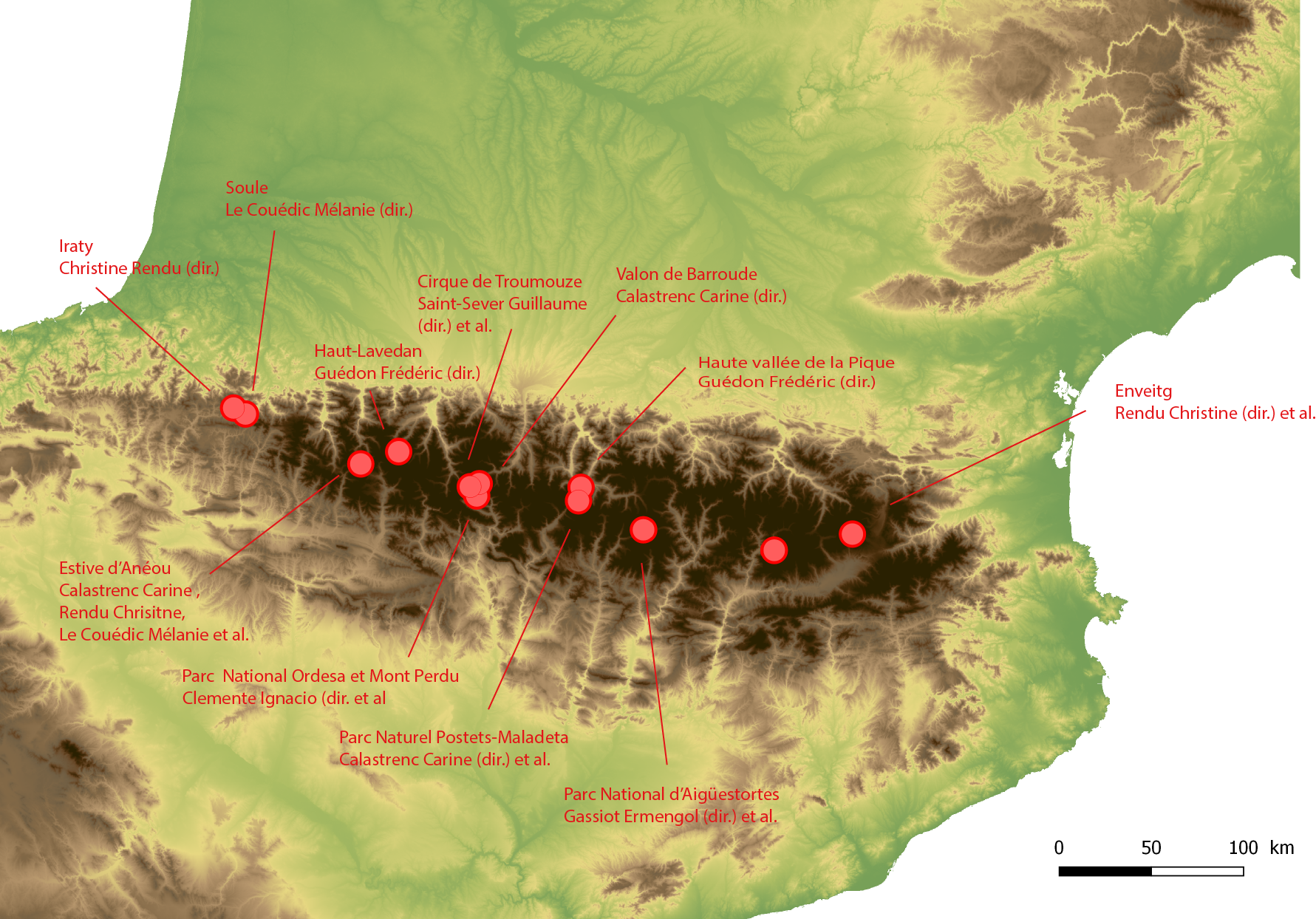 Figure 1 - Location of the different research programmes in pastoral archaeology in the Pyrenees. 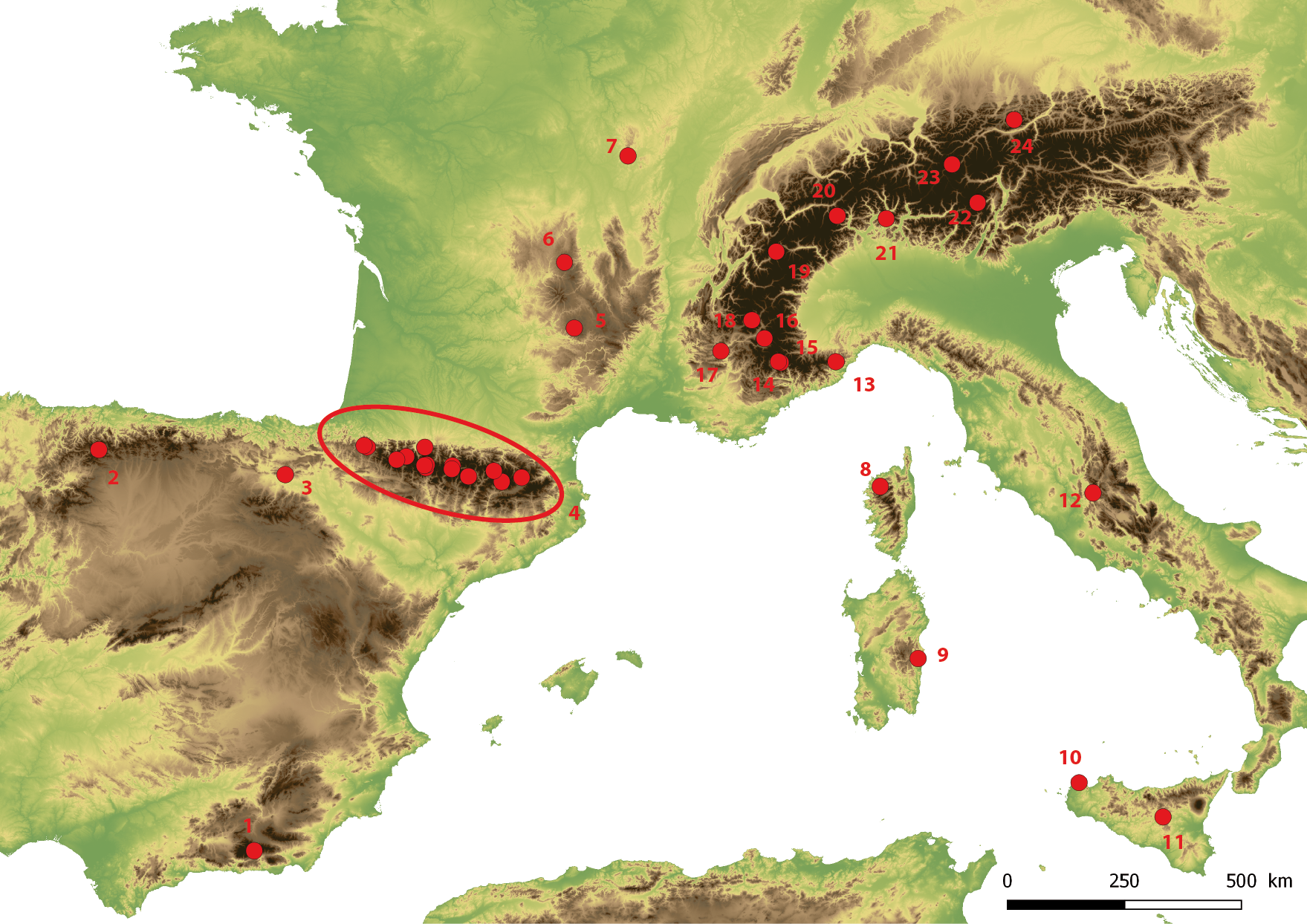 At present, given the number of study areas open, it is possible to have a statistically significant and statistically significant quantity of of archaeological prospecting data, but also of archaeological data from the dated data that allow for the systematisation of information and to have a real comparative reading of the evolution of the trajectories of the high altitude territories over the long term.

The different research teams involved in this work are However, they are faced with the problem of acquiring primary information during the prospection phase.

An essential prerequisite for any archaeological research is prospecting (Fig. 3) has specific features: route walking on steep slopes, difficult to access territory, land snowy for part of the year, the obligation to carry all equipment on a man's back or the need to organise and finance a portage (mule or helicopter transport).

Access to the most complete archaeological information possible in the shortest possible time is the challenge of the canvassing.

The following questions then arise: 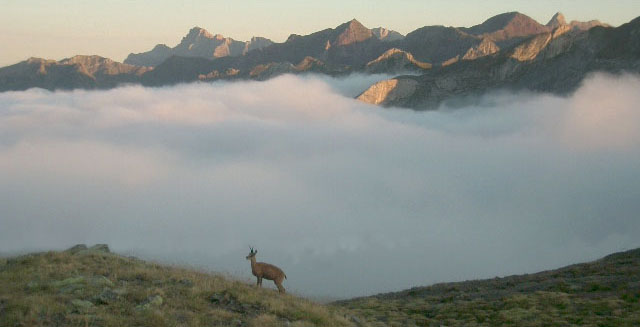 In contrast to prospecting work on the plains, in high and medium mountain, the detection of archaeological structures is not supported by the on the analysis of the distribution of the artefacts collected on the surface (Poirier, 2010; Poirier & Hautefeuille, 2014, 2015, 2016, 2017). The the plant cover is far too dense and prevents any prevents archaeological artefacts from rising to the surface.

In a very general, but not systematic, way, the infrastructures the most flattened pastoral areas are perceptible through alignments of stones or topographical anomalies (micro-reliefs) (Fig. 4 and Fig. 5) ; the others, more recent, are identifiable by low walls (Fig. 6 and Fig. 7). 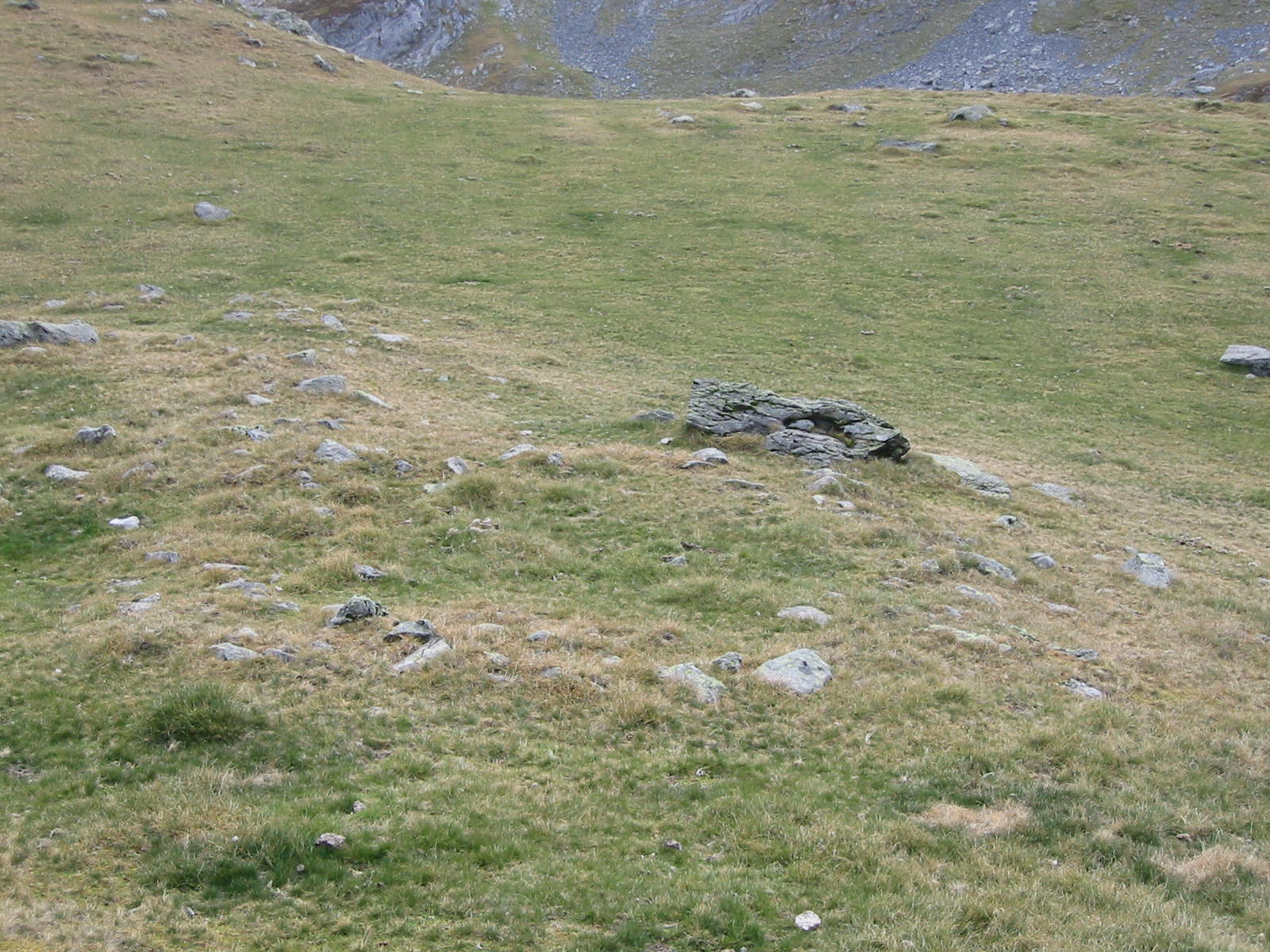 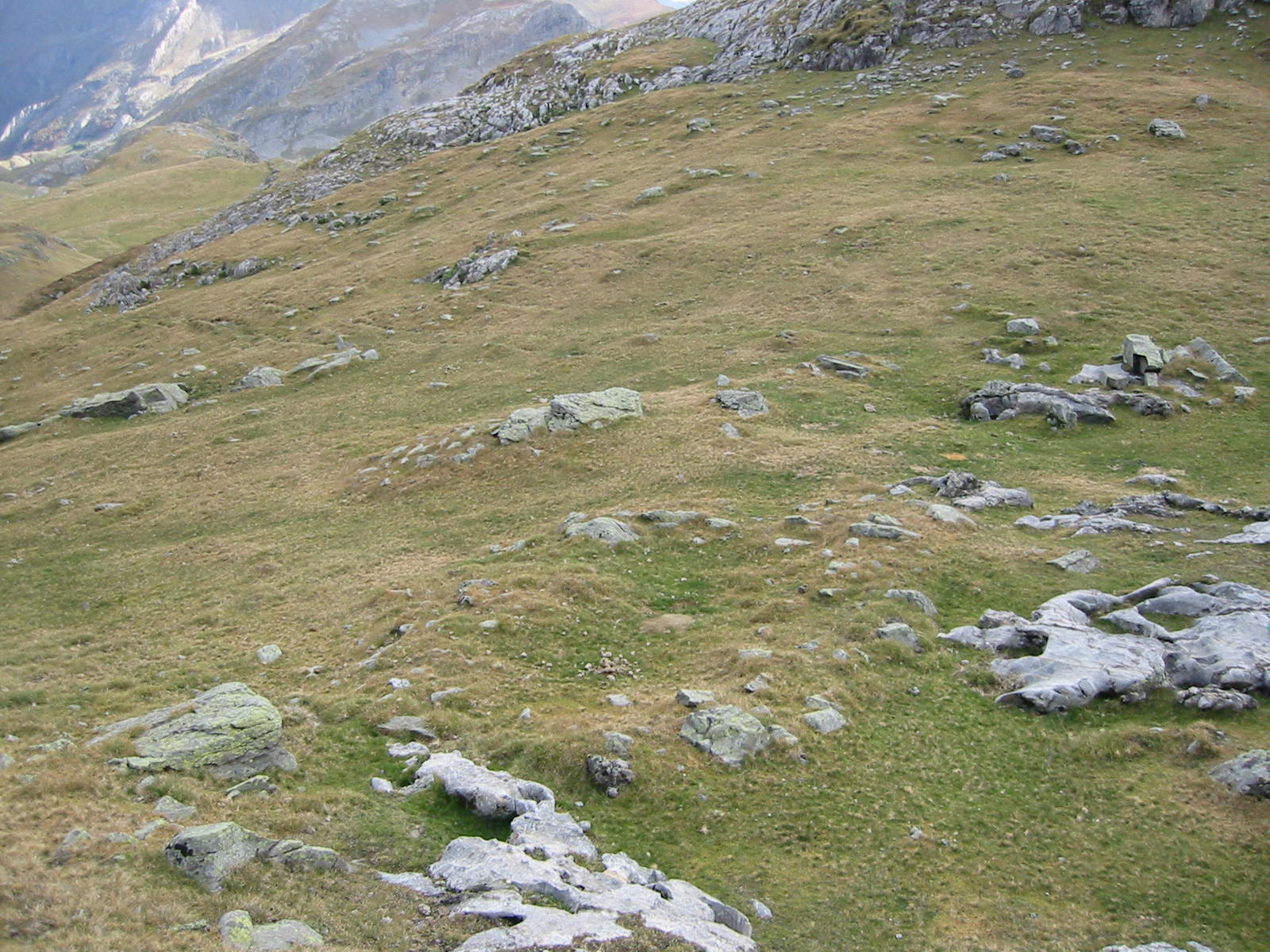 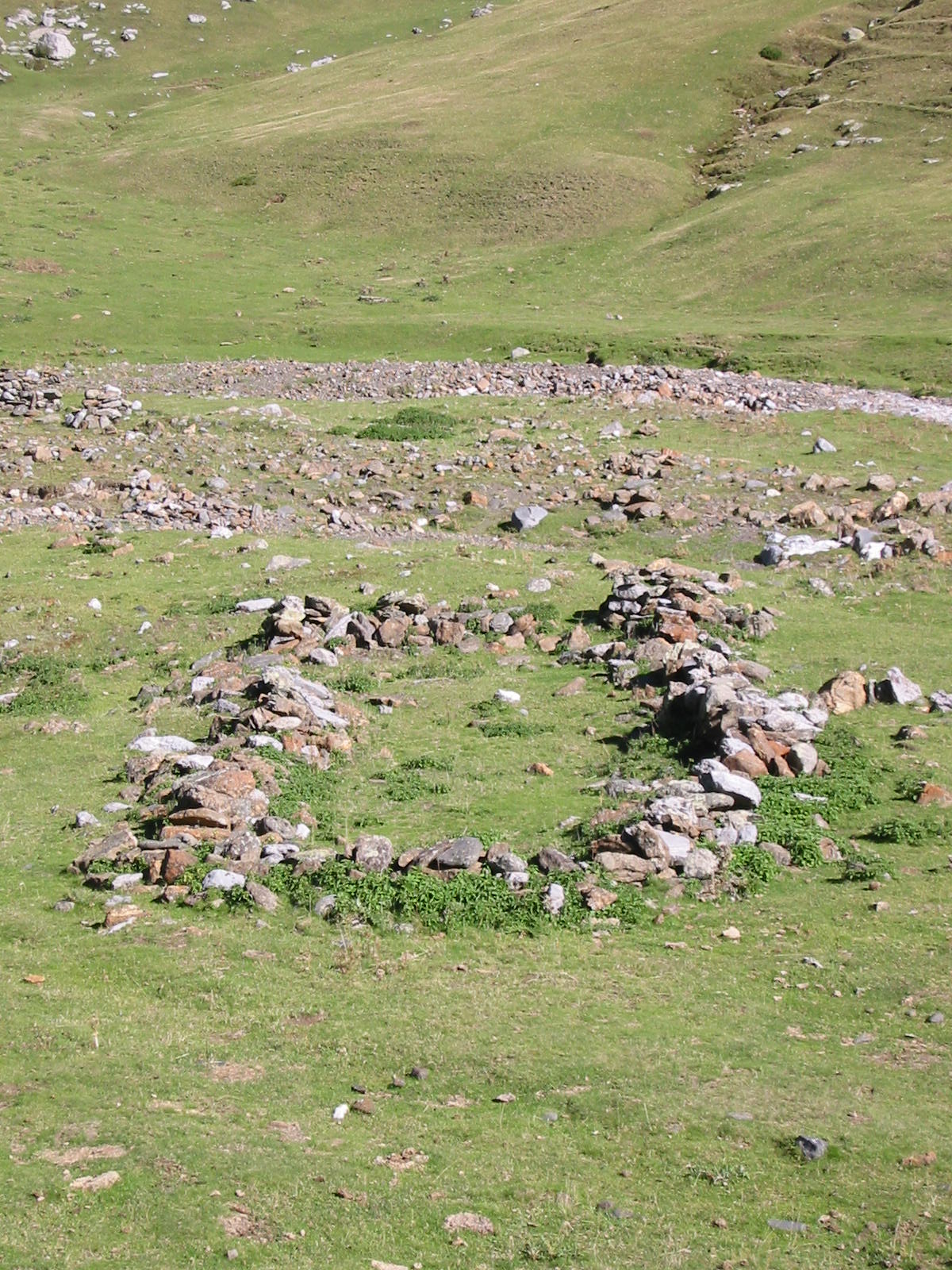 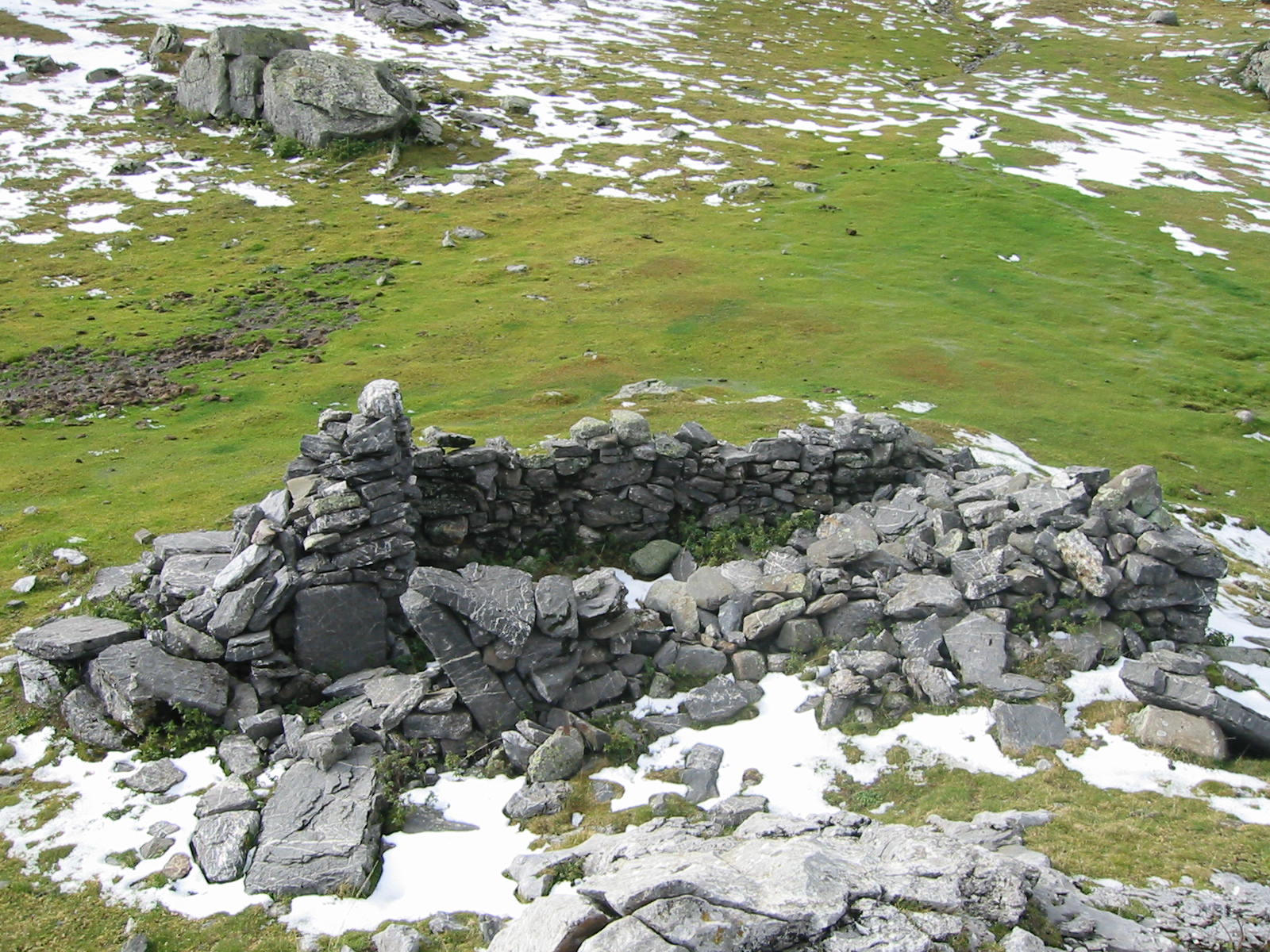 The semi of points and the plans resulting from this diagnostic work do not be reduced to a simple inventory. Prospecting is a a real tool for historical and archaeological research (Rendering, Calastrenc, Le Couédic, & Berdoy, 2016, p. 61). But in order to do so, he exhaustiveness, because only a representative and complete corpus of data can be statistically strong can allow for an analysis of the spatial organisation of pastoral structures.

In spite of the various technical evolutions that have taken place over the last few years years to facilitate and maximise the work of pedestrian prospecting in high and medium mountains, this phase of the work still comes up against the Today there are two major methodological obstacles:

The research programme TAHMM (Remote Archaeological Remote Sensing in High and Medium Mountains) aims at developing a new procedure for approaching the prospecting of these environments by using of non-invasive methods and the implementation of an integrated approach multi-source, multi-scale and multi-temporal.

New technological advances (diversification and miniaturisation of sensors), the democratisation of certain tools (development of aerial UAVs) and software for the processing of data now make it possible to reflect on the implementation of the new procedures for the acquisition of information for detection archaeological remains.

The research project TAHMM seeks to establish a procedure allowing the detection of the archaeological remains of the activity pastoral and/or agro-pastoral activities in high and medium mountain areas by non-invasive methods. It is not a substitute for the of these spaces, but to implement traditional methods of these spaces and tools capable of handling larger areas with the and resolution to incorporate these features into the design of the new data in a monographic research process (study of a summer pasture, a site, a mountain) or more globally (comparison of territories).

This research project is therefore based on a multi-source and multi-scale approach. From the processing of satellite images to physico-chemical analysis and the acquisition and study of data acquired by drone with different sensors, all the archaeological remote sensing and geophysical tools will be used to identify archaeological remains in high and medium mountains.